Showing posts from January, 2020
Show all 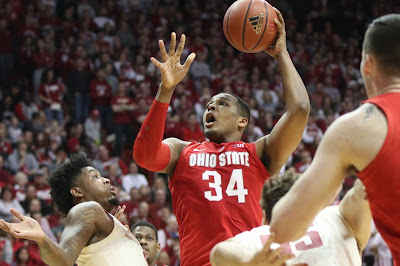 Ohio State Buckeyes vs. Villanova Wildcats : 76-51 (played on 2019-11-13) Score at the half: 40-22 The Gavitt Tipoff Games are an annual eight-game series played between the Big Ten Conference and the Big East Conference to tip-off the college basketball season. One of the games played in mid-November 2019 was held at the Value City Arena in Columbus, Ohio. The Ohio State Buckeyes hosted then the Villanova Wildcats in front of a huge attendance of 16,419. It was Villanova 's first ever game at OSU . After a 9-0 run for the home squad, with Duane Washington Jr. (guard, 1.90m, freshman) hitting two shots from three-point range, Villanova 's Head Coach Jay Wright took a first timeout. 'Nova 's guard Collin Gillespie (guard, 1.90m, junior) had been called two quick personal fouls and went back to sit on the Wildcats' bench after only 2 minutes spent on the court. Washington Jr. made 17-3 for the Buckeyes on a nice dunk followed by another three-poin
Read more
More posts