Showing posts from November, 2019
Show all

A look back at the Belgian derby in Group E of the FIBA Europe Cup: Spirou Basket Charleroi vs. Phoenix Brussels Basketball – Game day 5 on Nov. 19th, 2019 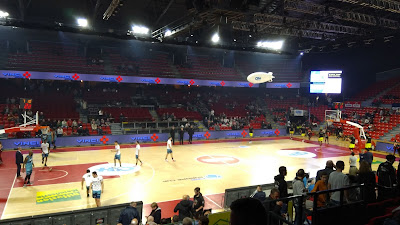 Phoenix Brussels defeated Spirou Basket Charleroi by a close margin of 3 points (104-101 after overtime) in the first Belgian derby of the 2019-20 FIBA Europe Cup in Neder-over-Hembeek on Oct. 30th, 2019. Bert and his son Théo went to the Dome in Charleroi to attend the second act of the Belgian derby on Nov. 19th. It looked hard for the local organizing committee to attract basketball fans and enthusiasts and only a very sparse crowd joined the arena for what was nevertheless a very attracting game on paper. The first cold temperatures combined with the Belgian national team’s soccer game against Cyprus broadcasted on the public television did not really help in boosting the fans to travel to the Dome . Former Belgian Lion Khalid Boukichou , who was hired by Spirou Charleroi a few days before the contest, had an impressive start in the game. He controlled the traffic in the paint and actually scored the first 9 points of his team, to the joy of the few local fans who
Read more
More posts