Showing posts from May, 2015
Show all

Bert went to a Scooore! League Play-Off game in Charleroi, Belgium on May 8th, 2015: Spirou Charleroi vs. Limburg United 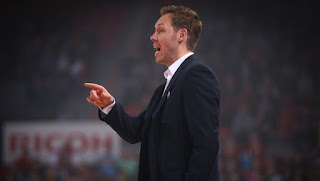 Those who attended the third and decisive game of the Scooore! League quarter-final series between Spirou Charleroi and Limburg United on May 8th, 2015, did very well in doing so since high quality basketball was played during 40 minutes. Kim Clijsters , the ex-tennis superstar and wife of Limburg United Head Coach Brian Lynch , arrived at the half-full Spiroudome in Charleroi right on time for the tip-off. From the very beginning of the game, Limburg United proved that it would not be an easy one for their hosts. Spirou trailed behind most of the first quarter and the scoreboard showed 17-26 at the end of the first quarter. Despite the low attendance at the Spiroudome , you could feel the play-off atmosphere among the fans. The visitors had a great shooting average, especialy from behind the three-point line. Spirou Charleroi of Coach Jacques Stas came close at 30-35 in the second quarter but the Limburgers remained tough in defense and were able to play quick in tran
Read more
More posts